Scotland is a beautiful country, anyone who spends time on Instagram can tell you that. But, even though Scotland is only a few hours from Manchester, I’ve never taken time to explore it. The islands of Scotland have been on our travel list for a long time, so this summer we hopped over to the Isle of Barra.

Barra sits in the south of the Outer Hebrides and is one of the smallest inhabited islands. It is approximately 23 miles square and has a population of just over 1,000 people. Only Vatersay is smaller and that’s joined to the south of Barra by a short causeway.

To get to Barra you either take a five-hour ferry from Oban or fly in the small Twin Otter aeroplanes from Glasgow. We opted for the plane because, not only is it shorter, but you get to land on the beach. 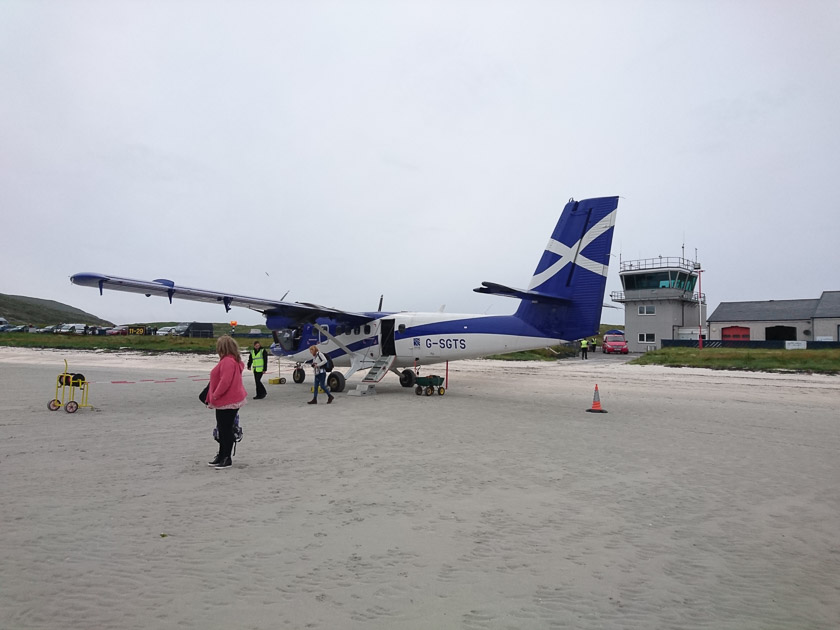 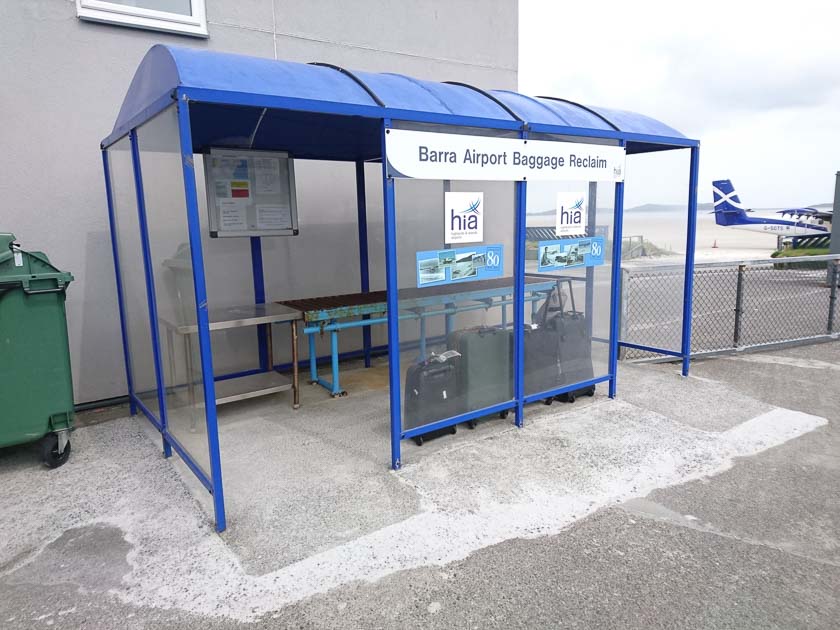 Barra airport is unique because it is the only airport where scheduled flights use the beach as a runway. I hadn’t realised, but the airport is in the north of the island, away from the main town of Castlebay. The runway beach is called Tràigh Mhòr and is possibly one of the most amazing beaches I have ever seen. It is a huge expanse of white sand and is excellent if you want to find cockles for your tea. 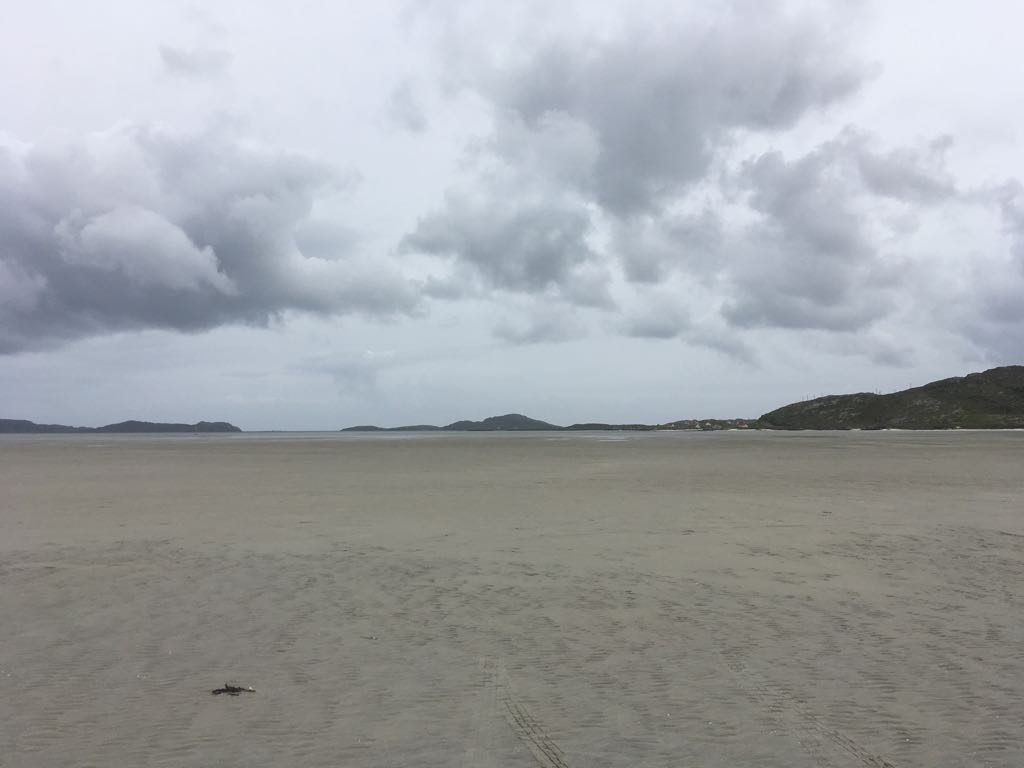 To make sure I was prepared for the trip, I hired two lenses from Hireacamera. When I’ve hired lenses before it’s cost an arm and a leg, so I was on the lookout for something more reasonable. A friend recommended Hireacamera and turns out they’re super helpful and reasonably priced. For one week’s hire and two lenses it was just over £200. They even included a packet of Haribo in the lens case which was a nice little treat.

The two lenses I chose were the Sony 12-24mm f4, and the Sony 70-200mm f4. As expected, both were super. They were brilliantly sharp and gave me a huge amount of flexibility when shooting.

Once on the island you quickly realise there isn’t much there. However, if nature and wildlife is your bag you’re in the right place.

On our first day, we took time to explore the north of the island. Drive past the airport to where the road ends and you find a pier that leads out into the turquoise water, and on a clear day gives you a beautiful view of South Uist. 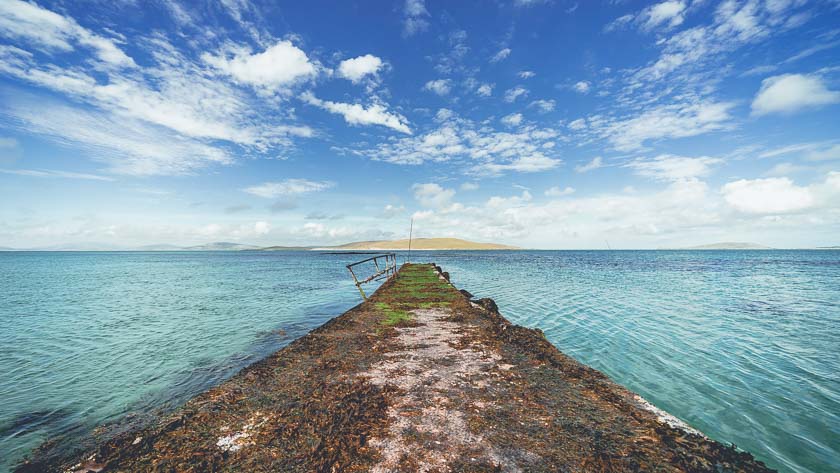 This pier is a great location for crabbing as there is plenty of seaweed for them to hide in. All you have to do is drop in your bait and wait. The water by the pier is so clear, you can watch the crabs scuttle across the seabed and into your net. In the end, we had a competition to see who could catch the most. It was pretty even but we ended up with about 40 crabs in a bucket! 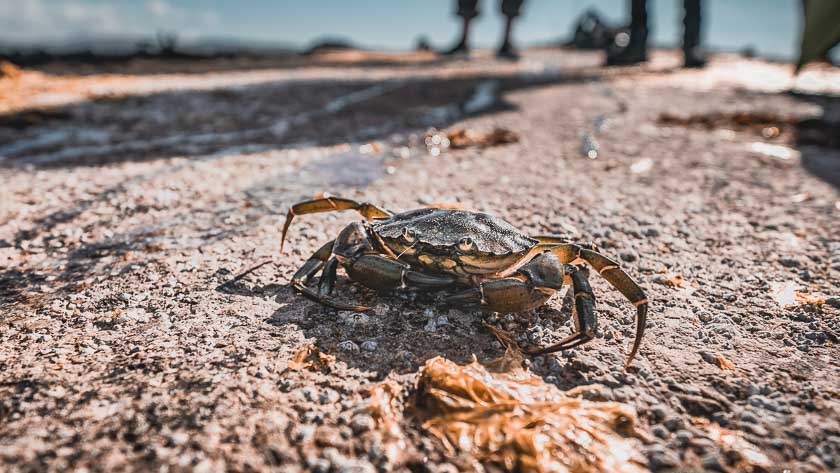 One of the crabs we caught scuttles back to the sea after we released him.

Alongside the pier there are two stunning beaches; Tràigh Sgùrabhal and Tràigh Cille-bharra. They are perfect for walking and exploring. Kids would have a whale of a time on them as there are plenty of rockpools and the water is nice and shallow for paddling. 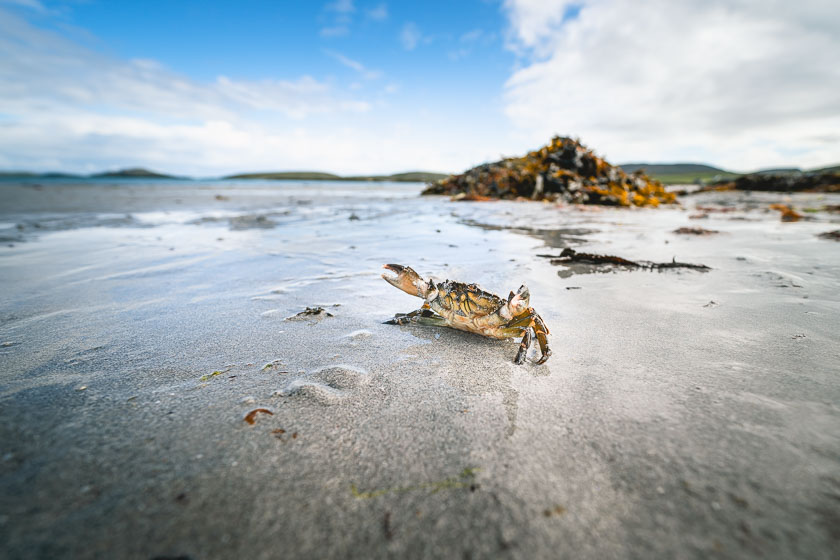 A crab challenges me to a duel on Traigh Cille-bharra

If you head south again, back towards the airport, you’ll find a beach over the road that is just as pretty as Tràigh Mhòr. This beach is Tràigh Eais. There are huge sand dunes that run the length of the beach that you have to climb over before getting to the sea. It was a windy and chilly evening by the time we got there, but it gave me the opportunity to take some moody portraits for Andy aka Feint. 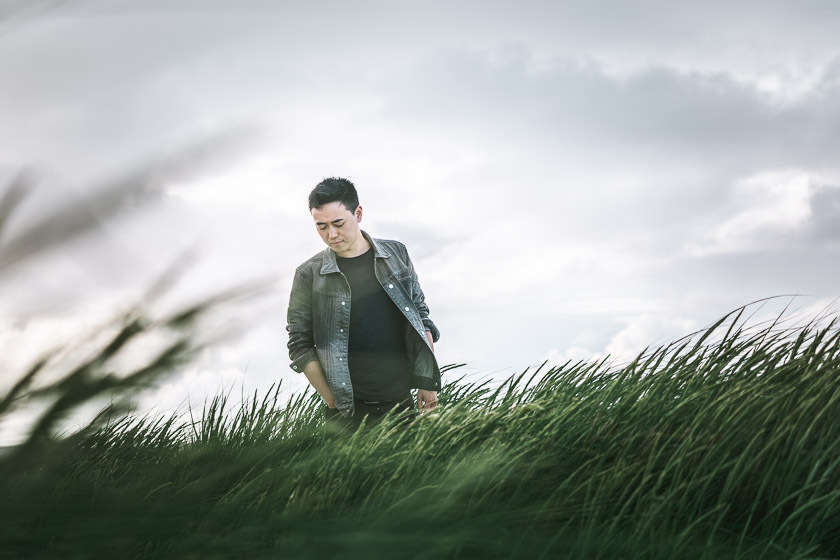 There are lots of little roads you can explore in the north of the island. You’ll definitely get some stunning views especially if you head out for sunrise or sunset. The island is full of quaint little cottages and dinky fishing boats bobbing around in the bays. 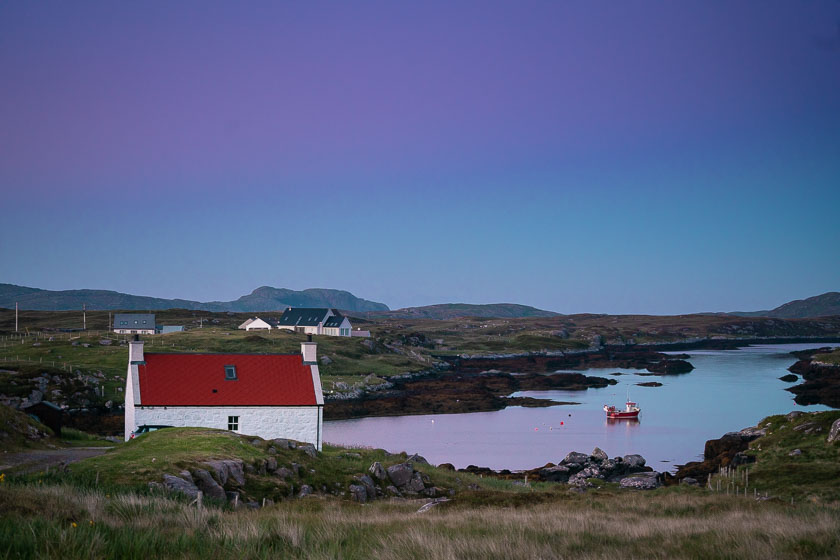 Sunset over an inlet in north Barra. 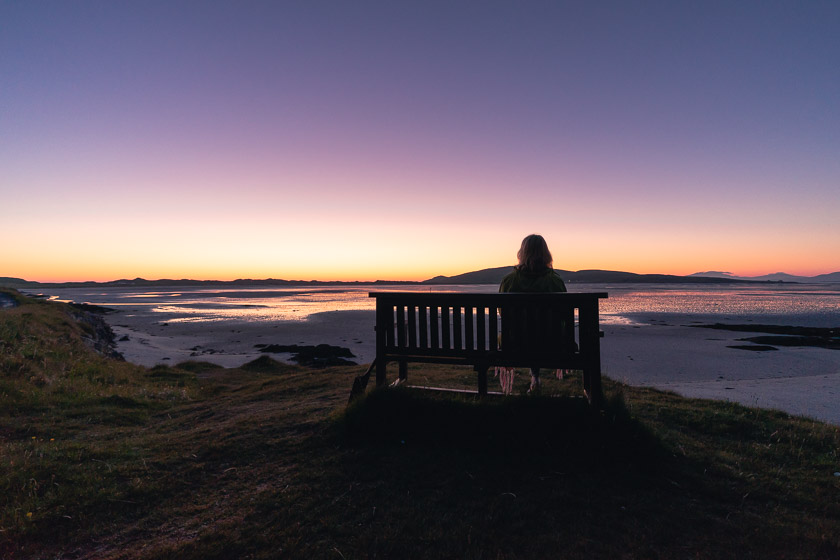 Looking over Tràigh Mhòr at about 11pm.

Barra is 90% hill, which is great if you like hills (not so great when you’re trying to cycle around the island). But, the hills do offer some nice walks. The largest hill on Barra is Heabhal at 383 metres. You can climb this hill from Castlebay. Keep an eye out for the statue of the Madonna and child on the way up. If you’d rather tackle something smaller, there are plenty of other hills to climb that still give you great views.

We climbed Beinn Chliaid which was, conveniently, right behind the house we stayed in. This hill is just over 200 metres high so it took us about 45 minutes to climb and 30 minutes to come back down. From the top you have a lovely view to the north of the island and South Uist, and a clear view of the west of the island including the most westerly golf course in the United Kingdom. 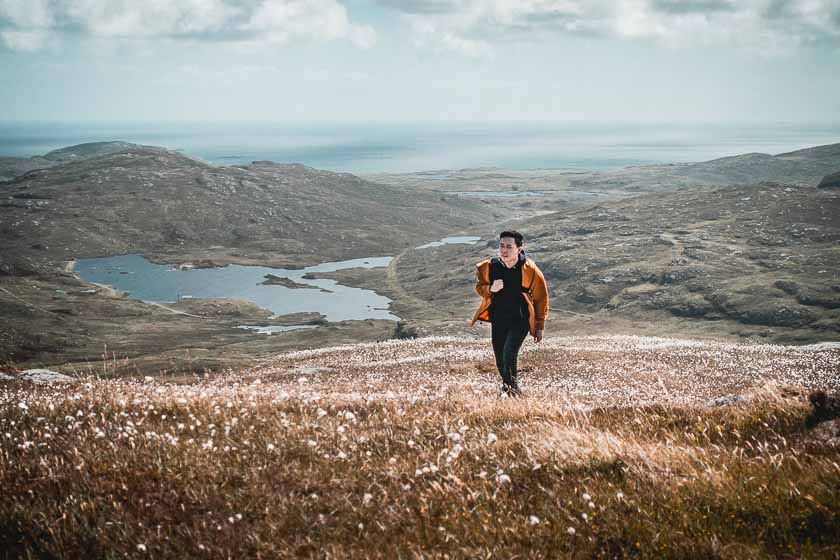 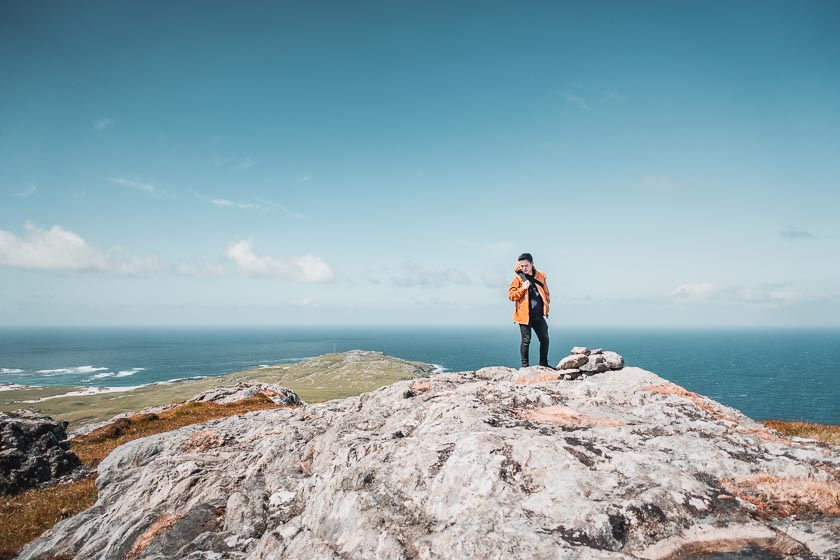 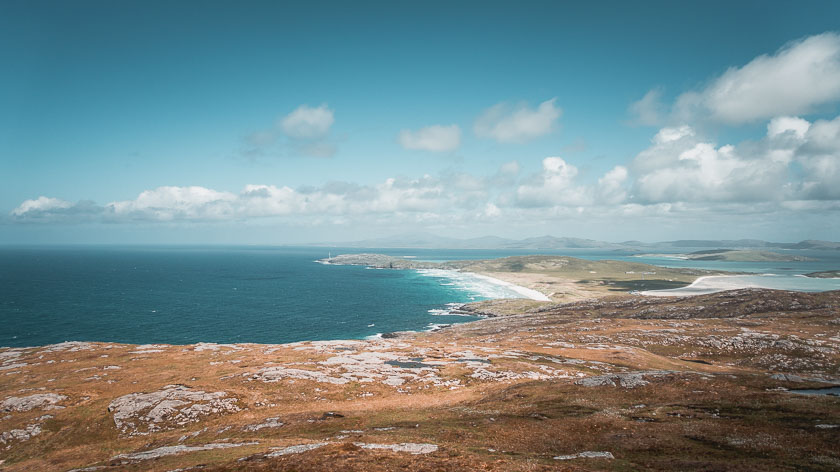 Castlebay is the main settlement on the island and is called Castlebay because, well, there’s a castle in the bay. Kisimul castle is the ancestral seat of Clan McNeil who now lease it to Historic Scotland for the princely sum of £1 and a bottle of Scotch per year. We didn’t tour the castle but you can hop on a boat to go and have a nosey. 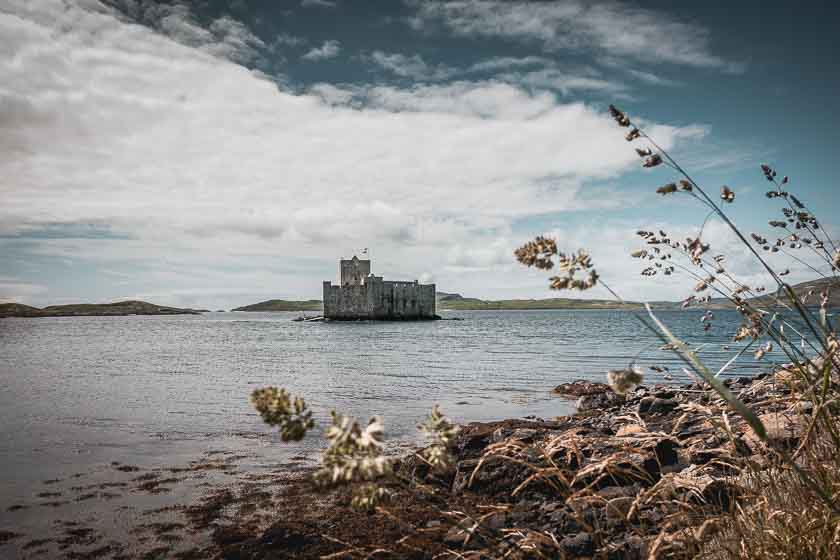 In Castlebay you can find a Co-op and a few other convenience stores, a hotel and hostel, a pub and a bar. There is also the excellent Cafe Kisimul which serves tea and cake by day and delicious Indian food by night.

Cycling is a great way to explore Barra. You can hire bikes from the local Barra Bike Hire and can choose either a traditional push bike or an electric bike. I’d highly recommend the electric bikes because Barra is just, so, hilly. Stupidly, I chose a normal bike and instantly regretted it. But, dad and I did have fun cycling between our holiday house and Castlebay, and exploring the smaller roads and beaches along the way. 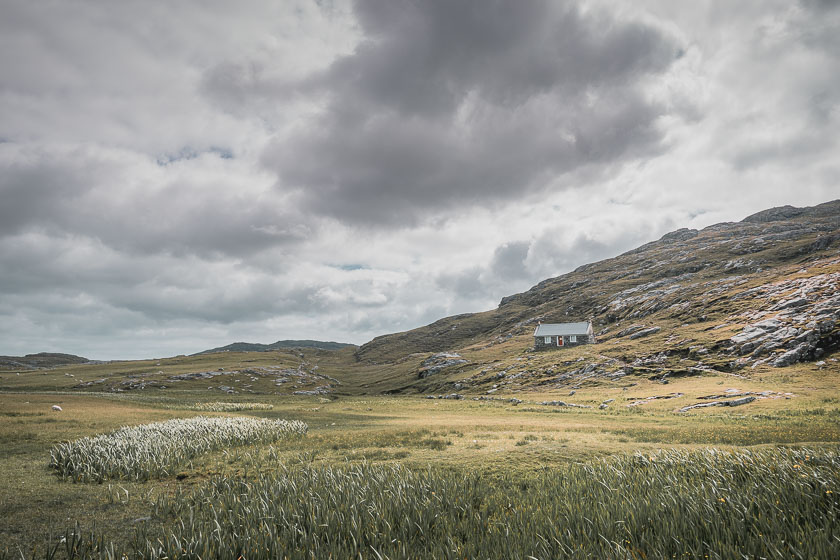 A stone cottage near Borve

Mingulay is likely to be the highlight of most visits to Barra. It is a small, uninhabited island about an hour’s boat ride south of Barra. It once had a small population but the islanders left in the early part of the 20th century for a better life on the main island. Now you can explore the ruins of the village by the beach, and enjoy the wildlife.

You get to Mingulay by boat, there are two main tour operators and we went with Mingulay boat trips & wildlife spotting.

Mingulay is home to a healthy colony of puffins, razorbills, guillemots and black-legged kittiwakes among others. During the nesting season, you can sit on the hillside and watch swathes of these birds come in to feed their young. This was the reason for our visit; we sat for hours watching the puffins fly in and out with their beaks full of sand eels. 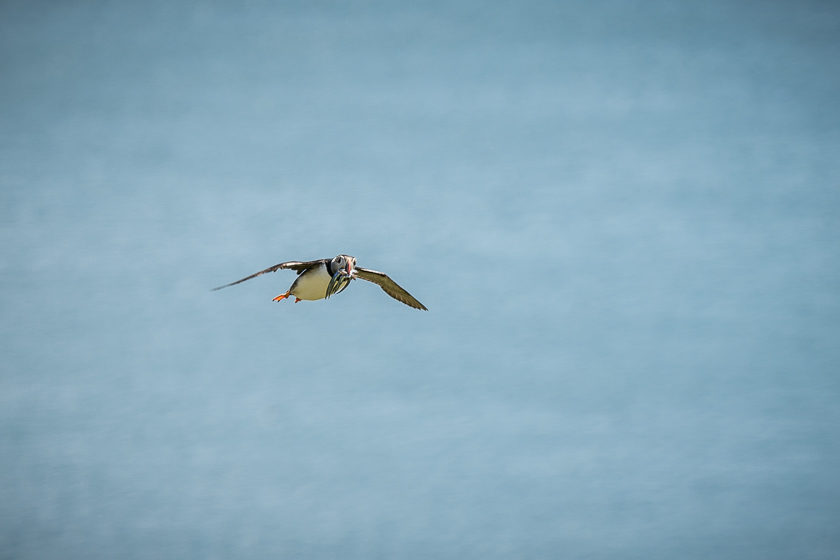 As well as the sea birds, grey seals come here to pup. We were too late to see the beach filled with the pups, but we managed to find these two enjoying the sun. 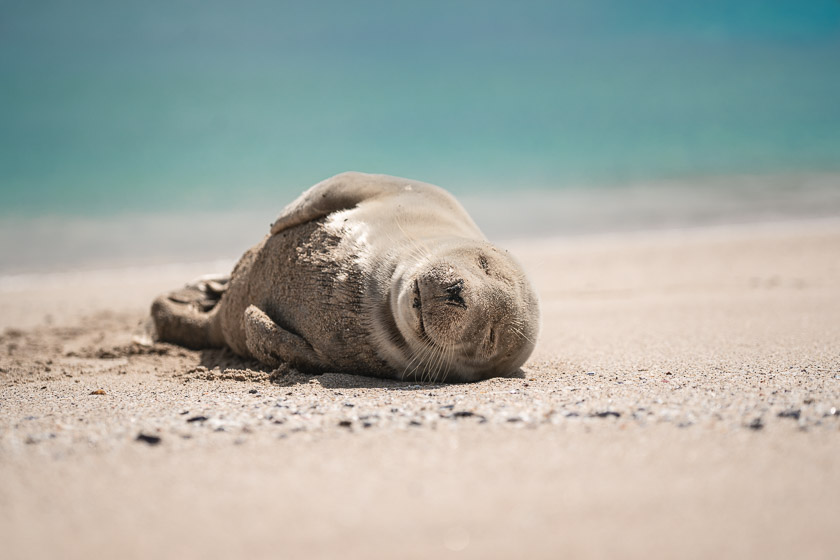 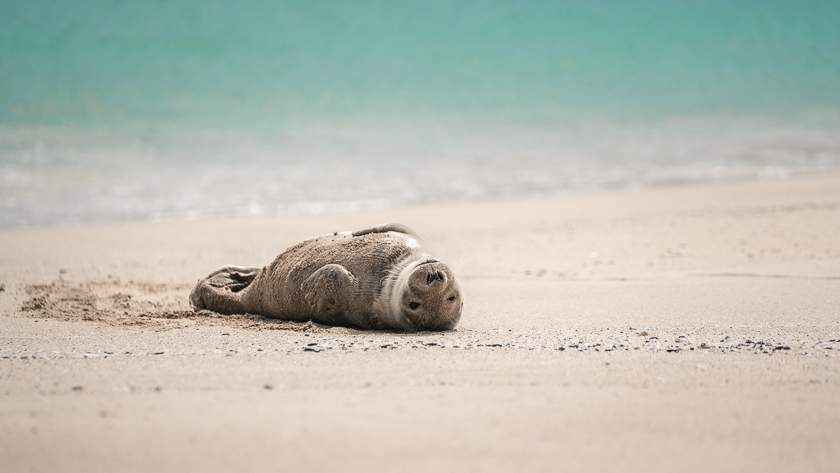 The main beach on Mingulay is simply stunning, it looks like a mediterranean beach. On a hot day like the day we visited, the sea looked so inviting. 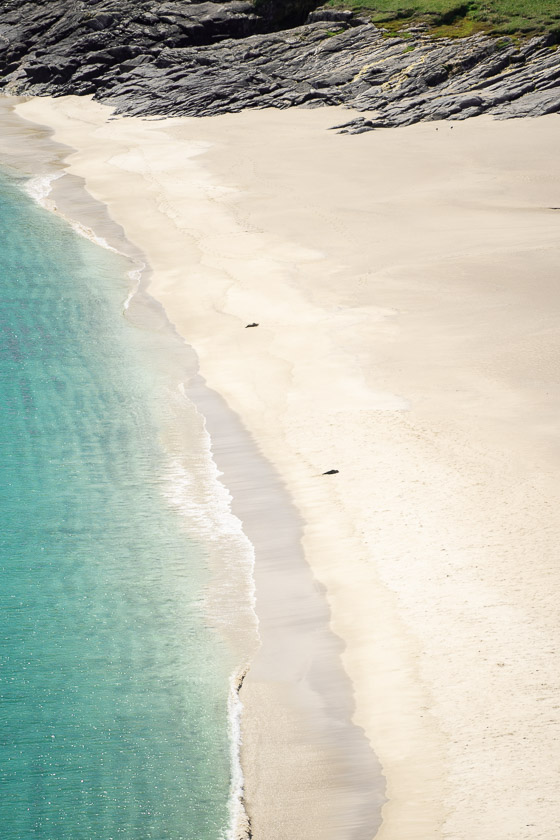 At the top of the beach is the abandoned village. There are only a handful of houses left and most of them are crumbling into nothing. They’ll soon be buried beneath the sand and you won’t be able to see them at all.

You only have four hours on the island. It sounds like a long time but, by the time you’ve walked from the landing stage, through the village to the nesting cliffs and sat and enjoyed the view, it’s time to head back to the boat again. There is no permanent landing place for the boat so it pitches up where ever the weather allows it to. This meant we scrambled across rocks to get on and off the island. I probably wouldn’t recommend this trip if you’re not very sure on your feet.

On the journey back, if the sea is calm enough, the skipper may take you through the sea arches on the far side of Mingulay. Sadly we didn’t get the chance, but it is supposed to be spectacular if you do.

Barra is stunning. We were there for just under a week which is about right if you really want to explore the island. I would love to go back but take longer to explore the whole of the archipelago. The other island in the Outer Hebrides offer just as much, if not more, stunning scenery and wildlife.

I would recommend visiting these islands to anyone and I would love to go back!